A New Spin on Easter Dinner

We were invited to Aggie’s for a potluck dinner and I decided it would be nice to find something with a new spin on the traditional items that appear at the Easter table. So, I picked up the May edition of the Food Network Magazine and found exactly what I had in mind!

In the “On the Road” section, there is a nice little article on Giada De Laurentiis in which the author shares some advice from Giada on “where to eat, shop and relax like a local” in Los Angeles. Featured is her favourite salad from La Grande Orange in Santa Monica. As soon as I saw the colourful Brussels Sprouts Salad, I thought it would be a perfect spin on the usual Brussels sprouts and Hollandaise so routinely served at Easter.

With its brilliant spring green coupled with the dried blueberries and cranberries and smoked almonds, it almost looks like an Easter egg hunt! Add the lemony dressing, it almost mocks Hollandaise. I had to substitute a couple of ingredients and while I have copied the recipe as it appears in the beautiful magazine, I’ve also listed my changes.

¾ cup vegetable oil – canola for me

Note: The article stated it takes 15 minutes plus chilling and serves one. It took me 15 minutes just to disengage the leaves from the Brussels sprouts! (I guess if I was willing to sacrifice more of the end pieces it would’ve gone more quickly. I just so hate to waste good stuff!)

It seemed like a lot of salad for one serving, which I’m sure makes sense if it’s your main course. I doubled the recipe with the idea that once prepared if it looked too skimpy to take as a potluck contribution, I’d add a bit of baby spinach. In the end, there was plenty for a potluck contribution. And if I’d read the recipe all the way through, I wouldn’t have doubled the dressing. On the other hand, it isn’t a hard ship having some dressing left over because it’ll work well for all kinds of salads or vegetable dishes!

Despite the cleaned & ready version plenty of prep 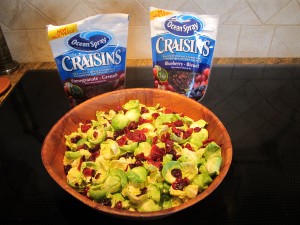 Knowing that many of Aggie’s friends are vegetarians and there’d be lots of salads and bright vegetable dishes, I decided to forego the usual bottle of wine and picked up a big bottle of Okanagan Premium Cider Harvest Pear. It has a sparkling flavour that is not too sweet and full of the promise of the year’s harvest with its crisp pear profile.

This Brussels Sprout Salad packs up quite nicely and looked great at its destination on the potluck table.

It was a wonderful Okanagan afternoon and over 30 people acted on Aggie’s invitation. The food selection was diverse and exceptional. My salad disappeared quickly and this recipe will definitely have a permanent place in my collection.

As if the day hadn’t been grand enough, in addition to my usual forest friends – the deer—there were elk along the way home.

Glimpse of elk on way home

Live. Learn. Write. I’m the behind the lenses, author of the words kind of person. In classic drama or opera or the Robertson Davies’ book of the same title, I’d be the player called Fifth Business. Fifth Business is neither heroine nor villain yet instrumental in making the plot happen. I’d far rather learn about you than talk about myself and building relationships is at the core of who I am. The more I learn, the more I realize I have lots to learn. When I was a child one of my nicknames was Small Fry. Now I understand. I really am a small fry in a great big world of learning.
View all posts by rozsmallfry →
This entry was posted in Food, Lifestyle, Uncategorized, Wine. Bookmark the permalink.

4 Responses to A New Spin on Easter Dinner