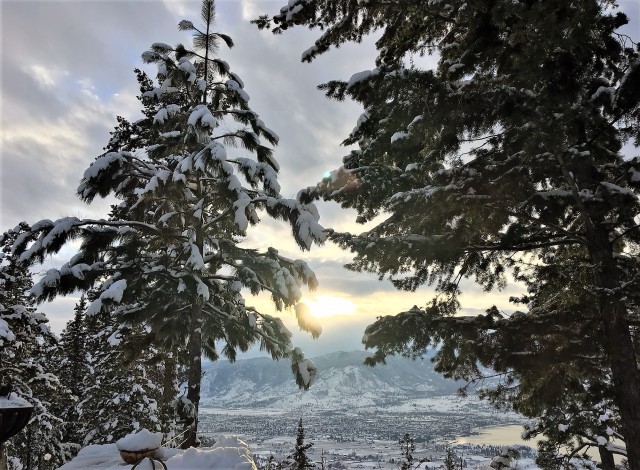 It’s Winter Solstice so, for me at least, there’s hope in the air. As the hours of sunlight each day progress toward Spring, my recollections through the Christmas season promise golden moments in the new year.

I count myself as lucky and live a good life although I wouldn’t be straight with you, if I didn’t mention there’s been a melancholy brushing up against my world.

The realization in November it was 25 years ago since we said goodbye to my Dad hit hard. Today, as I write this, my dear friend Jennifer Cockrall-King is delivering a talk about her Dad (Terrence Cockrall, Q.C.) at his Memorial Service and Prayers in Edmonton. My husband Mark and I are there in heart with her and her family. We had the privilege of reading the text of her presentation. In her usual fashion, she is humble about the talented piece of writing in this time of deep sadness.

December 9, 2016, my brother-in-law’s Mom (Ida Kearns) passed away at age 93 on what would’ve been my Mom’s birthday had she not died in 2008. For me and my siblings, Sandee and Barry, she was the last of our surviving parents. If that doesn’t touch your mortality, I’m not sure what would.

How long Mom and Ida lived on after their dearly loved spouses was also a reminder that life goes on. We were so proud of both these strong ladies on moving forward from such loss.

My Dad had always been healthy and strong beyond normal standards. He had survived World War II despite on four occasions having his tank hit sustaining no personal injuries. On one of those occasions he was blown right out of the tank to be the sole survivor. To his death, his teeth were almost perfect save for a couple of cavities related to shrapnel hitting him during the War.

While it was after us kids had grown up and urged him to share stories, we learned of other significant incidents where luck seemed on his side. Once, he came upon a field of mushrooms, which he always loved, and was so thrilled to have a change in the army rations, he wandered randomly happily gathering up all he could find. Just hours later without any new enemy activity, a group of allies were taken out by landmines buried in that same field. Another time, he got caught behind enemy lines and hid first in a grain field. Then local friendlies, at great personal risk, stowed him away for a few days until it was safe enough for him to creep back to his side. The Canadian Army had advised his parents he had died and quickly had to telegraph them with the good news he was alive.

In civilian life, he defied death, too. When he underwent emergency surgery in Calgary for a ruptured appendix, the surgeon discovered he had ruptured previously. His body had formed his own protective sac around it preventing the infection from draining into his abdominal cavity. Somewhere in medical journals, this amazing fact is documented. Because of Dad’s steadfast health, my parents knew exactly that the earlier rupture had happened when we lived in Fort Churchill, Manitoba in the sixties. They recalled Dad had a brutal stomach ache, however, refused to go to the hospital. The only doctor in town at that moment was known to be a morphine addict and there was no way Dad would trust him.

In the end it was Dad’s hard work that changed his luck. He died from Mesothelioma, industrial-based cancer from asbestos exposure. Some folks would be extremely bitter about that. Not Dad. If his family would be taken care of, he could resign himself to the fate, saying who knew at the time there’d be such consequences. Oh, he demonstrated hope and put up a good fight. Then, died graciously surrounded by love.

Here I share a Luck was a favored companion, written about Dad by Brian Brennan in his Calgary Herald column Tribute: People Who Made a Difference.

That year as we celebrated Mom’s birthday, December 9 without him and dreaded the arrival of Christmas, their wedding anniversary on December 26 and New Year’s and beyond in his absence, I sent out the Christmas message shown below.

We Do Move Forward
In examining my melancholy, I accept some of it’s related to a coming of age and changing of seasons. The departure of old things making way for the new. Some of it extends beyond me to people I care about. A friend whose marriage ended, a nephew-in-law who lost a sister far too young to die, a girlfriend’s whose husband died from cancer, friends sandwiched between aging parents and needy adult children, other friends experiencing career challenges and so goes the list.

Tearing at my heart is my husband’s growing desire to move away from this acreage that I love so much. In the stressful final years of my fulltime working days, creating this home on this view property was my talisman that kept me going. Now, having actualized that dream where we live comfortably within a wildlife corridor whose occupants give me so much joy, I am reluctant to let go.

Then I remember my Mom and how awesome she was every time my Dad said it was time to move again. For the love of him, she would pack up our family, start the dialogue about the wonderful experiences ahead, and then fill us with love for our new home. It was magical, and reminds me of the strength in giving our happiness freedom from one place or time or thing.

As the poet William Wordsworth so eloquently put it in Intimations of Immortality:
“What though the radiance which was once so bright
Be now for ever taken from my sight,
Though nothing can bring back the hour
Of splendour in the grass, of glory in the flower;
We will grieve not, rather find
Strength in what remains behind”
Read the whole poem here, www.bartleby.com/145/ww331.html

For now, forgive me if I over post on social media, all the splendour in which I’m immersed. I’ll “be in the moment” until the new journey unfolds.

Live. Learn. Write. I’m the behind the lenses, author of the words kind of person. In classic drama or opera or the Robertson Davies’ book of the same title, I’d be the player called Fifth Business. Fifth Business is neither heroine nor villain yet instrumental in making the plot happen. I’d far rather learn about you than talk about myself and building relationships is at the core of who I am. The more I learn, the more I realize I have lots to learn. When I was a child one of my nicknames was Small Fry. Now I understand. I really am a small fry in a great big world of learning.
View all posts by rozsmallfry →
This entry was posted in friends, Grief, Joy, Lifestyle and tagged BCwildlife, bighorn sheep, deer, elegy, Okanagan, Penticton, tribute, wildlife, wildlife corridor, winter solstice. Bookmark the permalink.