Built in 1926 as a boarding house for the International Smelting Company, the Rico Hotel is an historic registered site. The warmth of the front lobby area with its high beamed ceiling, huge fireplace, overstuffed leather couches and rustic furniture still welcomes the weary traveler. It was a particularly comforting haven from the storm on the chilly February 2011 day we entered it after a challenging wintry drive over icy roads from Telluride.

The room was another matter. Worn and showing its age, it was a tight space despite the innkeepers’ attempt to make it cheerful with the bed decorated by a cozy quilt comforter. The attractive headboard refused to keep the pillows in place and we were constantly fishing them out from the floor behind it. The bathroom compared to one you’d find on a small ship or old trailer – just enough room to navigate your way through the door to enter a tiny room with a tin shower, sink and toilet. It was possible to sit on the toilet and brush your teeth at the sink without stretching. I’m not sure how a person of significant size could manage it! Adjusting the heat was a challenge with the main room hot and the washroom freezing. We eventually cracked the mystery by propping the bathroom door open to redistribute the temperature, making the room even smaller but cozy.

I would not return for the room itself. I confess we were trying to economize and went for the hotel’s least expensive. On the other hand, the Rico Hotel held other highlights. It was Super Bowl Sunday so we headed to the lounge and restaurant – the Argentine Grille – hoping to catch the game and enjoy some pub grub. Initially we were concerned because we could not spot a television. Not to worry, our server, Brian, led us upstairs to an area with satellite television and told us we could have dinner there. 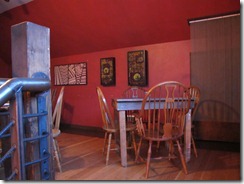 He told us the specials of the day, and from that we quickly selected the potato and leek soup, a three cheese pizza with tomatoes and a couple of Budweiser beer, a beverage choice we felt fit for the game. We weren’t overly hungry so thought we’d choose on the lighter side. In retrospect, we should have read over the menu more thoroughly.

Brian raved about Chef Eamonn O’Hara and assured us we had selected wisely. He wasn’t entirely wrong. We learned Eamonn had worked in the kitchens of the prestigious Hotel Bel Air in Beverly Hills, The Peaks at Telluride, and got his start in Liverpool and Ireland. Then the food arrived.

To start, Brian presented a complimentary basket of homemade bread with a roasted garlic bulb. It was the finest roast garlic we ever had. The delicate fresh thyme leaf on the butter pats hinted of the attention to detail practiced in Eamonn’s kitchen. The roasted garlic had sweetness about it and there was no bitter aftertaste. Even the crisp skin had a crunchy appeal. Later, Eamonn was kind enough to share his technique. Drizzle the whole bulb without cutting off the top with good olive oil and red wine vinegar, wrap it securely in tinfoil and bake it at the lowest heat in your oven for three hours. (I have a garlic roaster and will be experimenting at home with this technique.) 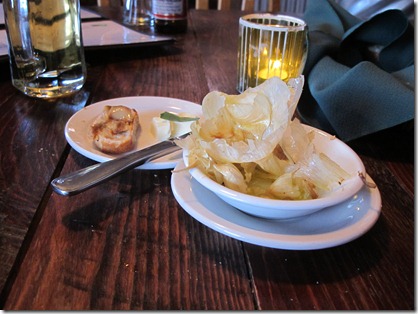 The soup was a beautiful pale orange and tastefully garnished with smoked paprika, bacon and onion bits. Each element was delicately balanced and distinct on the palate. I would not be waxing too poetically to compare it to a New Mexico rugged sunset and it was a large bowl at $9. The pizza may have been the finest I have had. It was a simple execution of good ingredients combined expertly on a lovely wood-fired thin crust. It was a great value at $12 and came with a beer or glass of wine.

While we noshed on these selections watching the big game, we lingered over the menu and learned more about the Rico Hotel chef. We discovered on Sundays as well as weekdays from 5 to 7 pm, small plate selections were available. In questioning Brian about this information, he was apologetic he had not pointed it out. He explained which main courses were offered at half price at roughly half the size.

Now I have to reveal, the food has to be awfully good for us to decide to order one more thing as full as we were. We asked Brian what time the kitchen closed and waited until much later in the game to order one small plate based on the menu’s four-ounce filet.

We had already had a second beer each while watching the game so each ordered a glass of red wine to have with the two-ounce filet. The wine was a Columbia Crest cabernet from Washington and a bit sweeter than we would have preferred. Its price of $9 a glass was the only other unpleasant surprise.

As ordered, the medium rare filet arrived with garlic mashed potatoes, sautéed carrots and zucchini and a rich mahogany reduced sauce. It was a meal that caused regret. No, not regret for ordering it but rather for not knowing who was in the kitchen before we ordered. While all the food was exceptional, there was no doubt in our minds that we should have skipped the beer, ordered a better bottle of wine and gone for two of Chef O’Hara’s main course full plates or four small plates. It was clear anything from his kitchen it would be excellent.

The filet was from James Ranch, local beef in keeping with the chef’s philosophy to support exceptional local products. In fact, in Rico there is a strong ethic to help each other out. For example, our server Brian is actually the operator of a local bar that was closes in the low season. It may be cliché to describe a great filet as melt-in-your-mouth tender yet there is just no other way to portray how perfectly this cut was prepared. The outside had a peppery crust and the interior was a perfect pink. We nibbled away at the small plate bounty wanting to savour each tiny morsel. Whatever shortfalls our assigned room had was mitigated by the sheer brilliance of our meal.

The room rate indicated continental breakfast was included at 8 am and based on the dinner we looked forward to whatever muffins or breads were to be presented along with coffee and juice. We awoke to a fine aroma of freshly brewed coffee and mystery items baked fresh that morning. To our surprise so much more was in store.

Attractively laid out were mini boxes of cereal with milk, orange juice, coffee, hot hardboiled eggs and sliced fresh strawberries, cantaloupe and orange. Off to the side was a table with piping hot oatmeal porridge with nuts and raisins to add as wished, breads, banana loaf, home preserve raspberry jam, and a selection of breakfast teas and hot chocolate. Then Eamonn delivered the main event – a golden toasted puffy frittata with potatoes, red onions, tomatoes and bacon. No wonder the place smelled so good! Again it was a relatively simple blend perfectly executed. 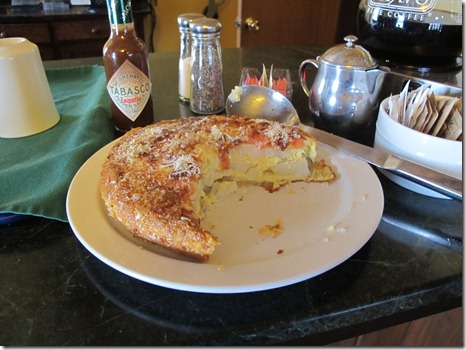 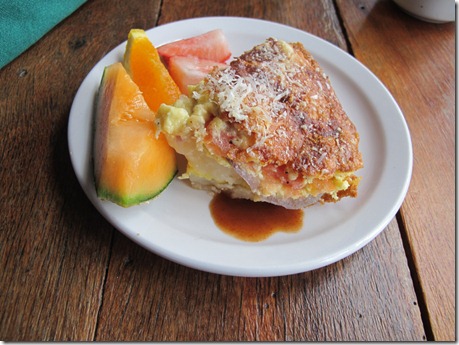 With the exquisite menu and crackling fire, we could have settled into the leather couches to linger with our coffees for the rest of the day. Our itinerary meant many miles ahead and with the snow falling, we felt we could not delay. While I don’t know just when, we will be back and in the meantime we will spread the news of the artistry in the Argentine Grille of the Rico Hotel.

Find the Rico Hotel in the spectacular San Juan Mountains of Colorado, about half an hour from Telluride or an hour-and-a-half from Durango.

2012 Update: You know a place is great when you’re still thinking about it 13 months later! Eamonn and his wife Lynda have continued to lovingly refurbish this property within the historic register guidelines since they purchased it. The description of the room in which we stayed may no longer be accurate. After sampling the chef’s creations and considering our complete experience there, we would stay in it again. In fact, as I said in one testimonial, we’d sleep on the floor just to savour Chef O’Hara’s cuisine again!

Live. Learn. Write. I’m the behind the lenses, author of the words kind of person. In classic drama or opera or the Robertson Davies’ book of the same title, I’d be the player called Fifth Business. Fifth Business is neither heroine nor villain yet instrumental in making the plot happen. I’d far rather learn about you than talk about myself and building relationships is at the core of who I am. The more I learn, the more I realize I have lots to learn. When I was a child one of my nicknames was Small Fry. Now I understand. I really am a small fry in a great big world of learning.
View all posts by rozsmallfry →
This entry was posted in Alcohol, Beverages, Culinary supplies, Drinks, Food, Joy, Learning, Lifestyle, Restaurants, Travel, Wine and tagged Chef Eamonn O'Hara, Colorado, Rico, Rico Hotel Mountain Lodge and Argentine Grille, Telluride. Bookmark the permalink.